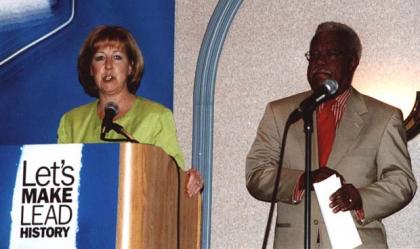 In 2000, there were 1,293 children age six years and younger in Monroe County whose screening results revealed blood lead levels of at least 10 micrograms per deciliter, which is the Centers for Disease Control and Prevention's public health level of concern [1-2]. Meanwhile, in 2003, researchers from the University of Rochester published a study that revealed that among 172 Rochester youth who were exposed to lead, even at levels below 10 micrograms per deciliter, they had reduced IQ-a measure of intelligence [3]. Unfortunately, lead poisoning cannot be treated. Lead poisoning causes irreversible damage to children's health, decreasing their IQ, and causing a variety of other physical and behavioral problems [1-2]. From a public health perspective, it was necessary to prevent any exposure among children to deteriorated lead paints and lead-contaminated dust-the main sources of childhood lead poisoning [1-2].

Members of the Coalition to Prevent Lead Poisoning recognized very early that by the time children were identified with high blood levels, the damage had been done. The Coalition focused on prevention and quickly realized that the only effective approach was to remove lead houses in older homes before they harmed children. In the City of Rochester, 87% of the housing units were built prior to 1950, and virtually all of these units contained lead paint. It was not until 1978 that Federal law completely banned the use of lead in paint for houses and furniture [2]. There was also a clear need to promote equity in housing and health. The housing units that were most likely to contain lead hazards from deteriorating paint were home to low-income families. 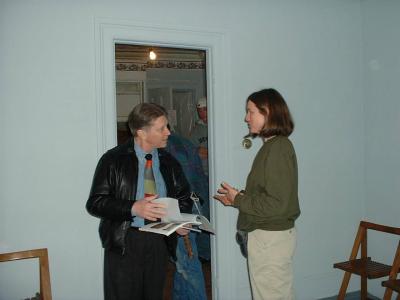 In 2003, the Coalition "borrowed" a vacant house from a supportive landlord and turned it into a "lead lab" to show community leaders and policy makers how to spot lead hazards and how to remediate them. In this photo, City Council member Tim Mains learns from Coalition member Dr. Katrina Korfmacher, University of Rochester. Councilman Mains went on to be a lead champion for the new City ordinance.

While childhood lead poisoning was a compelling issue, "it was not on the community's radar screen," according to Kathy Lewis, the former Director of Community Partnerships of the United Way of Greater Rochester (UWGR). Members of the Coalition did the heavy lifting of developing a strategy to eliminate childhood lead poisoning, promoting two local policy changes:

The Coalition had a great game plan, according to Ms. Lewis, but lacked the horsepower to win. Their leadership approached UWGR as that organization was developing a new public policy agenda. Though UWGR was poised to engage in policy work, they did not have a clear and defined objective. So, the organization's policy team set up a process and identified criteria for selecting a policy issue to get behind. They solicited policy issues from staff, volunteers, and community organizations. Their focus was on policies that would have impact; could be enacted on a local level; were aligned with their community investment priorities, and would be sustainable.

In 2004, after a rigorous prioritization process, UWGR's policy team ultimately chose lead poison as their top policy issue. They believed that the city and county could implement a policy change as proposed by the Coalition. The Coalition had the data and evidence to backup their case for a new law and UWGR could add the influence to help move decision-makers.

Once UWGR identified and defined reducing lead poisoning as its policy issue, they joined the Coalition to Prevent Lead Poisoning and moved forward with mobilizing the community to understand and advocate for the needed changes. The Coalition had grown from a small group of concerned parents, educators and clinicians who were "sitting around the kitchen table", as Lewis described it, talking about strategies to end lead poisoning to an entity that was broad and involved multiple sectors. The Coalition identified a strong base of support, and members included neighborhood groups, the Monroe County Department of Public Health, City and County government, housing organizations, parent groups, school districts, legal assistance organizations, the University of Rochester, and the Advertising Council of Rochester. The local public television station became a strong ally as well. 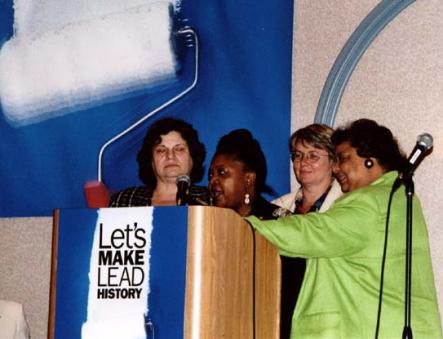 Leaders of key Rochester city neighborhood associations pledge their joint support to the goal of ending childhood lead poisoning by 2010.

Though support for ending childhood lead poisoning eventually became robust, the initial challenge was convincing the community-at-large and policy makers to care about their issue. Lewis said that "lead poisoning was not exactly a household term in 2004." Thus, an early effort became to organize a "Community Lead Summit". UWGR and the University of Rochester worked with the Coalition to organize this day-long event, involving national experts and over 500 community members. An hour-long call-in show about the issue aired the night before on WXXI, the local Public Television Station affiliate. The summit concluded with a "commitment session," in which elected officials and leaders in neighborhood, health, education and religious sectors pledged to support the goal of ending childhood lead poisoning by 2010 and committed to taking steps within their own communities to that end. Taped messages from Congressional Representatives and Senators praised the community for its effort. Most importantly, the Mayor and the County Executive pledged to support the two needed policy changes. Lead poisoning was now on the community's radar screen. 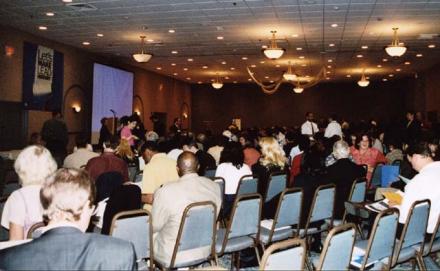 Over 500 concerned citizens and leaders attended a Community Summit on lead poisoning June, 2004 to hear from national experts, learn about strategies to prevent lead poisoning, and commit to the common community goal.

Though there was a groundswell of community and coalition support, Lewis had her doubts about the chance of passing the two policy changes. According to Lewis, "There was the usual pocket problem. The pocket that would save money was not the pocket that would spend the money." In other words, the eventual monetary savings to the health care, criminal justice, and education community from fewer cases of lead poisoning would not benefit the local landlords who would be the ones paying for lead abatement. A small but vocal group of landlords opposed the prospect of any ordinance. To understand and appease their concerns, the Coalition invited the opposition to join them. According to Lewis, "The rules for coalition building say that you invite people who disagree with you", and so the Coalition did. Lewis adds that "Initially, the landlords attended our meetings, went along with our process, and signed off at every stage. However, at the very end, the landlords rescinded their support of our draft ordinance." The landlords left the Coalition and submitted their own version of a local lead law to City Council. In hindsight, Lewis acknowledges that perhaps there could have been alternative strategies to engage their opposition.

Once the Coalition had submitted its draft ordinance, its members began to connect directly with policy makers. Coalition members pulled city council members aside in one-on-one meetings, informed them of the need for a new law, and asked them what their concerns were. It seems that the "tipping point", as Lewis called it, occurred when the local newspapers began to frame the issue of childhood lead poison as a contributor to poor academic performance among children at local schools. When it was announced that children were suffering academically due to lead poisoning, this caught the attention of policy makers. In December 2005, the Rochester City Council unanimously passed an ordinance that adds a lead hazard assessment to City inspections of rental properties.

The City legislation took effect on July 1, 2006. The ordinance requires all rental housing in the City to "receive a visual inspection for deteriorating paint as part of their Certificate of Occupancy inspection" [4]. In addition, units in "high-risk areas receive dust wipe tests for those houses that do not appear to have deteriorated paint" [4]. At the same time, Monroe County also added lead hazards to their current pre move-in inspection for public assistance housing. This was another victory for the Coalition. The county also investigates homes of children 0-72 months of age with elevated blood lead levels. Investigations include the "identification of lead hazards, issuance of a Notice and Demand to the property owner to eliminate the hazards by a specified time-frame, and reinvestigation to verify compliance" [5].

From 2000 - 2008, the number of lead poisoned children in Monroe County was reduced by 72% from 1.293 to 363 [1]. Monroe County is well on the way to becoming one of the first and few communities in the nation to eliminate lead hazard.

Kathy Lewis attributes the coalition's success to six key principles. She shares the following advice with others that want to work on local policy:

This profile would have not been possible without funding from the W.K. Kellogg Foundation. We also wish to acknowledge two individuals gave generously of their time and expertise to contribute to this profile:

For more information on the Coalition to Prevent Lead Poisoning, visit http://www.leadsafeby2010.org/